This was my second ultra (read about my first here) and my second year running Palo Duro and I still think it's one of the most scenic and fun trail races there is.   The organization is perfection and there is great campsites right there in the park where the race is.  In case you can't tell, I love this race!

We headed from Norman, OK to Canyon, TX on Friday morning.  There were a bunch of people from OTRA coming and we reserved two side by side campsites so once we made it to the canyon, we checked in at the park office and headed down to our site.  We set up tents and everyone started arriving.  There was a sense of excitement in the air..even the people that run this race every year are excited and glad to be back.  :) 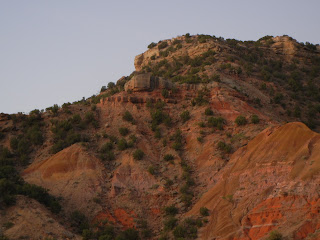 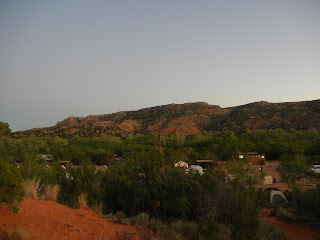 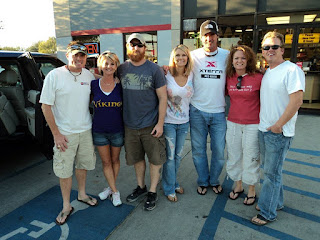 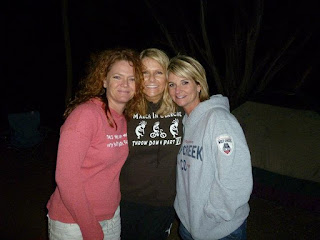 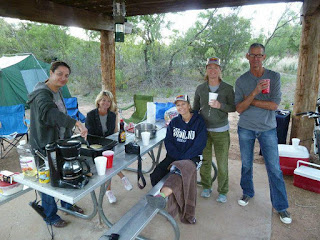 After everyone got situated we all drove to West Texas A&M where packet pick-up and the pasta dinner was held.  Pasta, salad, bread and desserts...it was all great.  After the meal the race director talked for a bit and answered questions.  He also had maps on the big screens around the room and showed everyone exactly where they would be running.

We headed back to the canyon after our meal and spent a few hours playing washers, goofing off and laying out running gear for the morning.  It gets really cold in the canyon at night so we piled on the covers and went to bed pretty early.

Race morning!!  Temps were upper 40's and a light breeze.  I was up early getting on my clothes.  I went with a running skirt, tank top, running sleeves and headlight.  I was freezing but knew it was suppose to heat up into the 90's during the day and dressing light was a must.  I ate lightly, just a piece of bread with some peanut butter and sliced banana.  I double and triple checked my hydration vest pockets and drop bag to make sure I wasn't forgetting anything.  We headed down to the race start at about 6:30 to check in with the timekeeper and use the porta potty one last time.  One thing I noticed was the stars and moon..the sky was so beautiful!  So clear and lit up. 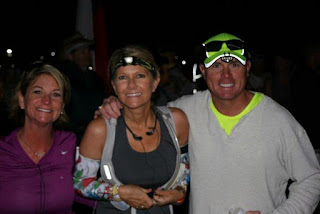 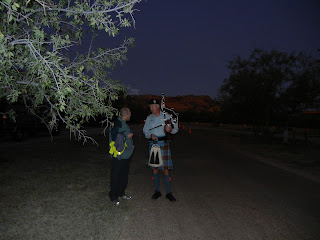 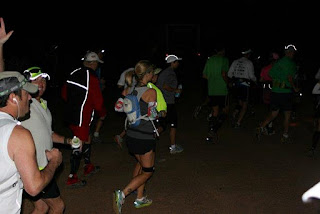 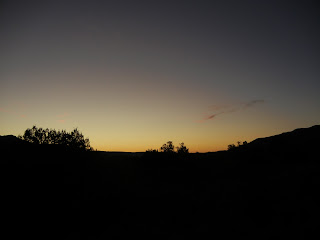 The bagpiper started playing and we were off!  The 50 milers and 50K'ers took off together and the 20K folks would start 30 minutes later.  There was really only about a mile of congestion and then it was pretty clear all around me.  I would see headlights bobbing around in front of me and occasionally behind me but pretty much I was already running alone.  I enjoyed the quiet and the dark and by about 4 miles in, the morning sun was peeking up over the side of the canyon and an orange/pink glow was bathing the trail and canyon walls.  This is my FAVORITE part of the race.  (well, and the bagpiper)   I was happy and feeling great, just running along loving life!  The first 4 miles of the course are rolling hills with mostly hard packed dirt and sand but some rocky sections. My race nutrition was going to be simple, just one Roctane gel and one Endurolyte on the hour.  I came into the start/finish at 6 miles and found my drop bag that Dave had set out for me.  I swapped my headlight for my visor and was out within a minute or two.  The next two laps would be 12.5 miles and I'd get to see some of the prettier sections with rocky bluffs and cliffs.  The trails get pretty technical in the middle of this loop but it's also breathtakingly beautiful.  I was steady and feeling great this whole lap and came back into the start/finish area at exactly 4 hours.  I figured I was definitely going to go sub 7 hours and was pretty excited everything was feeling so great!  While in the start/finish Peggy taped up my arch since it was hurting some and I ate some banana nut bread and a Honey Stinger waffle.  I headed back out feeling excited and ready to get this last lap done.  It was starting to heat up quite a bit and I had tied on a frozen bandana/tie thing around my neck.  I got it at Academy and it's suppose to stay cool for a long time but it didn't seem to help as far as I could tell and was more of a nuisance than anything else.

The wheels came off about 5 minutes after leaving the start/finish.  :(  All of a sudden my mild arch pain turned into excrutiating pain with every step and at the same time, the opposite knee started hurting bad enough I had trouble going down hills and had to start hobbling down.  And my stomach went south too...everything at once hit. I had left my ginger in my drop bag and didn't want to go back for it.  I took two Ibuprofen and hoped I could just keep making forward progress no matter how slow.  (I know you aren't suppose to take Ibuprofen during exercise so you don't have to warn me in case you were just thinking about doing so...)   : P

My friend Brad caught up to me at about mile 21 and he was suffering pretty bad himself with ITB pain.  He is a tough cookie!  We soldiered on together both hurting but determined to make it to the finish even as our time goals were drifting farther away.  We tried running all the flats and hobbling up and down the hills but did have to do quite a bit of speed walking too.

When we were getting close to the end and on our last little stretch of trail before turning onto the road for the finish, I saw Dave, Holly and Jason up ahead waiting to cheer me in and I just lost it!  Started bawling like a baby.  I don't know where that came from but I love those guys and seeing them there waiting on me did me in.  All the emotion came pouring out.  We finished in 7:31:03 and I went straight to a chair.  Melissa got me ice and iced my knee while Dave brought me ice cold water, veggie burger and cookies.  What a great feeling...even though I was slower than I had hoped to be!  Just finishing after feeling so bad felt like sweet victory. 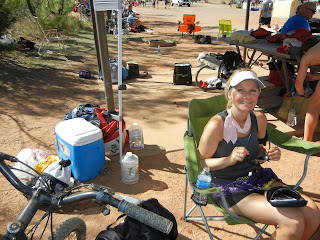 After the race we had a great meal that our "camp cook", Jessica made.  Chicken fried steak and red beans & rice.  Soooooooooo good!  My knee felt pretty battered and getting around was a chore.  I've never had knee issues so this was a new thing for me.  As I write this it's been 3 days and the knee is still sore but feeling better every day.  My arch is still really sore and I am doing massage with a tennis ball, ultrasound and Arnica on it.

We had pancakes on Sunday then loaded up and headed back home.  I had brought my shiny new beautiful mountain bike to ride but was way to tired and sore to do any biking Sunday.  Darn it! 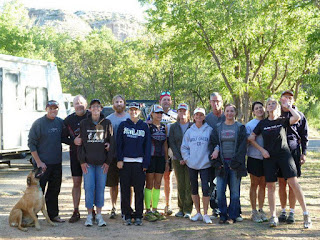 I'm already looking forward to next year! Palo Duro is a magical, beautiful place.
Posted by Julie at 6:52 PM