Last weekend Dave and I drove to Arkansas to run War Eagle Tailtwister.  SO glad we did!  Dave ran the 3.8 mile distance and I ran the 25K.  This race was extremely well organized from start to finish and I'm so thankful to Rush Running, Jeff Genova and everyone else that made this race happen.  Thank you, thank you!

We left early Friday morning for the 4 hour drive to Bentonville, AR to pick up our race packets from Rush Running.  Lots of goodies in there such as a water bottle, energy gels, glide and coupons for $25.00 off at Ruth's Chris Steakhouse.  The shirts are awesome!!  Yellow tech shirt with the coolest design I have ever seen on a race shirt.  This is my new favorite running shirt! 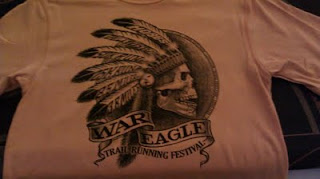 We browsed the store for a few minutes and got some directions from Jeff on how to get to the race in the morning.  Since we weren't very familiar with the area, we decided after checking into our hotel to drive out to Hobbs State Park (where the race is held) to look around and make sure we knew where we were headed in the morning.  We found it with no problem and Hobbs is gorgeous.  They have a beautiful visitors center so we went inside and met the staff and bought some souveniers.  I knew from the gorgeous views all around us that we were going to be in for a treat running these trails and I wasn't disappointed! 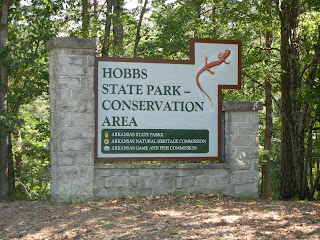 We ate a simple dinner at Johnny Carino's got back to the hotel to lay out and organize race clothes and supplies and turned in early. 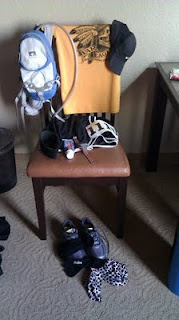 Quick note about the hotel, we lucked out!  Jeff (race director) had told me about Simmons Suites and that we could get a special rate if we told them we were running the trail race.  We booked there and got a rate of $63.00 per night.  I don't expect to much with a rate that cheap, but this was probably the nicest hotel room I have ever stayed in.  It was gorgeous!  We had a kitchen with granite countertop, sink, full size refrigerator and microwave, big flat screen TV, two large closets, king size bed and beautiful bathroom.  The hotel also offered a nice indoor pool and hot tub.  We ended up staying 3 nights and got that rate for all 3 nights.  The night before the race I turned on the ice maker in the hotel refigerator and bought a big jug of water from the convenience store.  Race morning I was able to fill my hydration vest with ice and water which stayed cold the entire race.  This helped so much as it was a HOT day.

Back to race morning...  We got up at 4:30 am, ate a PB&J sandwich and drank some coffee and I got my hydration vest ready.  We drove out to War Eagle Farms where we parked and caught a shuttle to the race start.  Everything was ticking right along like clockwork, very efficient and well organized!  There was a long line for the porta-potties as there were only two...but this was definitely no fault of the race organizers.  All available porta-potties in NW Arkansas were in Joplin where all the recent tornado damage clean-up is still going on.  From what I heard, they had to beg, plead and work miracles to get the two that we had.  Even with the line, everyone got through in time and I was able to get my chip on my shoe and visit for a few minutes before the race started. 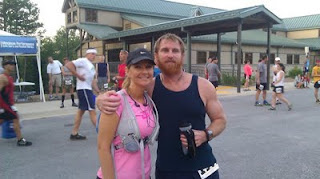 At 6:30 am on the dot, we were off!  Although it took a mile or so for us to thin out on the trail, the trail was mostly downhill and everyone was moving at a pretty good clip. I felt relaxed and happy the second my feet hit that single track!  :)  I knew it was going to be a fun day.  These trails were so differrent from what I am use to running at home.  Instead of the sandy, red dirt flattish trails, these were hilly and rocky with lots of pine needles.  Just gorgeous!  Even though there were a lot more hills than I am use to, I wouldn't say it was extremely difficult.  The hills were mostly long and gradual or short and steep.  Not very technical.  A good challenge for this central Oklahoma flatlander!!  My plan was to eat a Chocolate Outrage GU once an hour, take an S! Cap every 30-45 minutes and drink as much water as possible.  It was about 80 degrees at the start I think, with high humidity.  I heard when I finished the race that the temperature was 95 degrees with a heat index of 104.  Ouch.  I did fine though and never felt bad, but was relieved I was only running the 25K and I felt so bad for the 50K'ers out there running for so long in that heat! 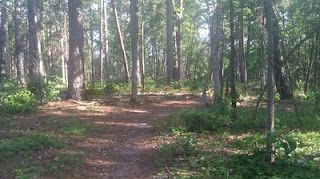 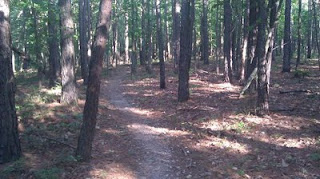 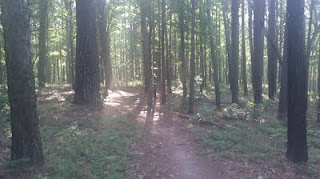 I ran as much as possible but stopped to take pictures, talk to other racers and grab a few things at aid stations.  There were aid stations at 7 miles, 10 miles (I think) and about 12 miles.  Fully loaded and with the most helpful nice people.  The TATURS were running the 7 mile aid station and Brian was running around with a big pitcher of ice water filling everyones bottles and hydration vests.  Thanks so much to all of the volunteers!!!!  My favorite aid station food of this race...  square pretzels filled with peanut butter!  Hit. The. Spot!!!   I am not sure what they were called...but the perfect race food.  :)  I never had to refill my hydration vest during the race, the 70 ounces lasted me the whole time.  I grabbed a couple handfuls of Pringles, the pretzel/peanut butter things and a few gummy bears at the different AS and ate three GU's during the race.
I didn't talk to very many other people during the race until the last 5 miles or so.  Met a really nice guy from Bentonville named Raymond and we encouraged each other through the rough spots during the last part of the race during the hilliest sections.  I kept thinking the whole time I was running, "I'm SO lucky to be out here experiencing this and I'm SO thankful"!!! 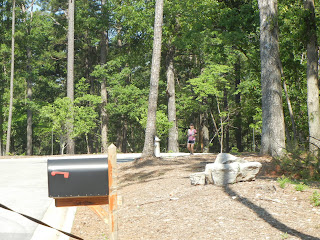 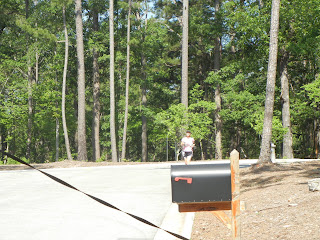 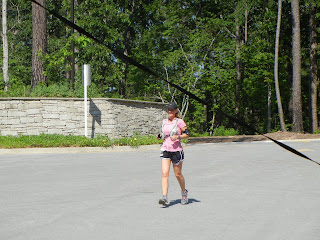 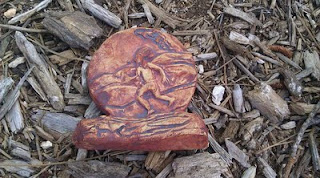 We hung out for a while afterwards while they had giveaways.  Dave won a pair of new Salomon trail shoes!  They also gave away Salomon packs and two PS3's with games.  The race organizers and RD really know how to put on a great race.  I saw only smiles and happy runners after the race.  We tried to hang out until a friend or ours, Don was finished with his first 50K but as the day got hotter, I felt more and more wilted and was needing to get out of the sun and heat and fill up on food and water.  Don ended up finishing his first 50K in 9:30.  It was after cut off and I'm sure he came in to little fan fare and I feel horrible about that and am so proud of him for finishing!  It was extremely hot and I know the next ultra will be that much easier for him.  Congrats Don!!!

One of the funniest things of the day was seeing Ken finishing the 25K BAREFOOT!  Dave spotted him first and asked if that was Ken about to cross the finish line...I said NO because I saw the bare feet and I knew Ken was not a barefoot runner and really liked his Hoka's.  But sure enough, it was Ken.  ;  )  He ditched his shoes before rounding the curve to the finsih line and finished barefoot.  I didn't get a picture, darn it!  Here is Ken's race report.

After the race...  Not much soreness at all and not one single blister!!  First trail race I think I have ever ran that I didn't have foot issues and blisters afterwards.  My Saucony Kinvara's are amazing and I'm so excited to have discovered them.  : )  Dave ran in his Merrell Pace Gloves which work great on our sandy trails at home.  The trails were much rockier in the race than he was use to and the bottoms of his feet are bruised.  I've never seen bruised feet bottoms, but he has them.  Three or four bruises on the bottom of each foot.  He was hobbling around a bit Saturday afternoon and Sunday but is feeling all better now.

We are planning on coming back next year and I am already planning on running the 50K.  I highly recommend this race.. it doesn't get much better or more fun than this!
Posted by Julie at 12:44 PM