My training plan for the Palo Duro 50K called for a 26 mile trail run this weekend.  I headed out to my favorite hilly trails early this morning.  I was excited to get started and had a feeling it was going to be a great run. And it totally was!!!  :)

Dave even came out with his mountain bike and rode by me a few times to offer words of encourgement and bring me cold water.  I loaded up my vest with 70 ounces of water, dates, energy bars and S! caps.  The first 10 mile loop was blissful with the outside temp only 59 degrees.  There was a breeze blowing through the trees and I was totally in my element and loving every second.  I purposely picked the hilliest routes to help me get ready for Palo Duro, although I think the route today was much hillier than what I'll see at PD.  The second 10 mile loop was a little warmer but still comfortable.  At the 20 mile mark I started running some flatter sections of the trails and finished up strong.  I couldn't be at 26 miles and stop there though, right?  At first I thought I'd tack on the .2 to reach marathon distance, but kept going until my Garmin hit 26.3 so that I went OVER marathon distance today.  Awesome! 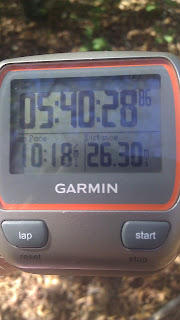 I'm sore but happy.... last really long run done.  Next weekend will be a 16 miler and the weekend after that a 12 miler. 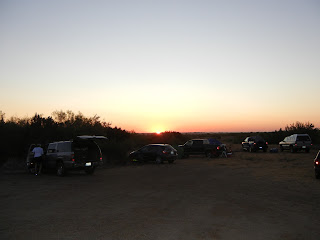 It's been a couple weeks since I ran the DoWackaDo trail race and I've been having trouble figuring out how to write a report about a DNF (my first).

I signed up for the DWD 25K months ago.  But as the race got closer and I started looking at my Palo Duro 50K training schedule I realized that I was going to need a 24 miler that weekend.  I decided to bump up from the 25K to the 50K so that I could get in a good training run for Palo Duro.  I knew I wouldn't be fully trained going into the race but thought I could at least walk out last 5 or 6 miles if I had to.

I decided do some food/hydration experimenting with this race.  I was wanting to take in only "real food" during the race and try to get by with no gels or sugary sports drinks.  I made my own energy bars (dates, puffed brown rice, honey, dried cherries, sesame seeds, cashews, cocoa, cacao nibs, coconut oil, almond butter, flax seeds and chia seeds) and carried a couple in the the back of my vest.  I also packed dates and beef jerky in the easy to reach front pocket of my hydration vest.  I brought several cartons of coconut water to mix with plain water to carry in my vest.

We drove down to Erick, OK on Friday afternoon.  After stopping at the Roger Miller Museum to grab our packets, we headed out to Sandy Sanders WMA to set up our tent at the race start.  There was a burn ban in that county (as well as the rest of Oklahoma I am sure) so no campfires, but we were able to bring our propane stove.  Dave cooked up some awesome black bean burgers, turkey burgers, roasted bell peppers and corn on the cob.  We turned in pretty early and were treated to the sweet sound of coyotes singing to us.  It was a gorgeous night and we slept wonderfully.  :)


I got up rested and ready to run! 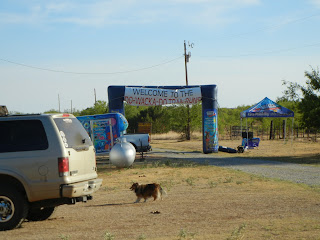 Some OTRA friends showed up Saturday morning so I visited with them until the race started.  The gun went off and the first hour of running was about as perfect as it gets.  The temps were in the low 50's and the early morning light so pretty.  I concentrated on not going out to fast and just relaxing into the run.  So far so good.
Something happened to one of the trail markers so most people took a wrong turn and we ended the loop with 12.3 miles instead of 16.  They remedied this with a short out and back near the race start and the sign was fixed so that the next loop was the full 16 miles.  Well let me tell ya.....the part we missed the first loop was the TOUGHEST part of the whole course!  Loooooong extremely steep uphills.  And the sun was out and the day was heating up.
I ran strong and felt great till I hit about 18 miles and then the sun, heat, hills and lack of hill training started catching up to me.  I slowed way down and would have spurts of feeling ok and then feeling overheated and bad.  Upon coming to the aid station at my mile 24, I decided to drop.  I had the training run I needed for Palo Duro and just didn't have it in me to keep going.  I was totally fine with dropping at the time but have to admit I have second guessed myself since then and do wish I'd stuck it out and followed my plan of walking it out if I needed to.  It was about 90 degrees when I made it back to the start finish and I was pretty dehydrated and tired.  Joel had a delicious meal at the finish line that I took full advantage of!   There was brisket, coleslaw, baked beans, mac & cheese and rolls.  And peach cobbler.. mmm..peach cobbler.  :)  I have heard over and over that there are lots of rattlesnakes in western OK and to be on the lookout.  I didn't see any personally while there, but they did pull one off of the course right before I ran through.  Cool!

As for my nutrition experiments..I'm happy to report that everything worked.  I took two S! caps during the race, ate one energy bar, 3 dates and a handful of beef jerky.  I did get behind in hydration and I think it might of been because the water/coconut water got warm. Warm coconut water is kinda ick which caused me to slow way down on drinking.  I forgot to put ice in my vest before going out for the second loop. I never really felt low on energy at any point during the race, just felt overheated and dehydrated. So I have to give all the food a big thumbs up and I'll probably do the same thing for Palo Duro.

Joel puts on a GREAT event and I can see this race getting bigger every year.  Everyone seemed to have a great time and there were some talented athletes out there.  He added a 50 mile race this year and a few finished despite the heat.  I'm sure I'll be back next year, we had a blast!
Posted by Julie at 8:56 PM No comments: