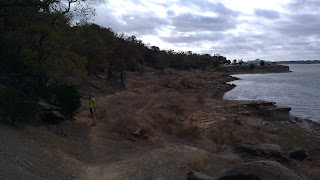 I always look forward to Rockledge Rumble.  It's my favorite time of year for running, and it's a great excuse to make the drive to Dallas, TX to stay with one of my best friends Holly and run a fun race with her. It's almost a tradition now after running the 15K in 2009, and the 30K in 2010.

Holly and I made it to Rockledge Park Saturday morning and picked up our packet, which as usual had a great shirt. A long-sleeved Patagonia baby blue shirt that I can't wait to wear on my next run.  :)  The race has a new race director that just took over this year and she did a great job.  I missed the post-race rice & beans that they used to have but the quesadilla and Tecate was pretty darn yummy.


It was warmish out, about 64 degrees and a little muggy at the start.  The forecast called for a high near 80 degrees and strong winds.  The start wasn't windy, but we'd certainly see some wind later on.

The Northshore trail is GORGEOUS.  I love this trail.  It's got a great mix of everything.  You start out on a short stretch of pavement, then run along the bluffs beside the lake before ducking into the woods for some tight, twisty single-track.  A few more open sections, some cool lake views.  Lots of rocks, some roots.  It's just a beautiful trail.  I somehow end up feeling really beat up at the end, even though it's not extremely hilly..I think it must be running on the rocks that does it. 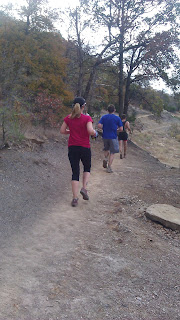 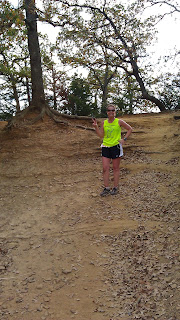 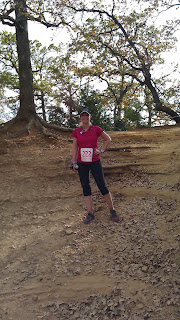 Holly was dealing with some ITB pain so our game plan was start slow and stay consistent throughout the race and that's what we did.  We set her Garmin to intervals.  5 minute run, 1 minute walk.  She did okay with the pain the first 14 miles or so but then started really hurting.  Trooper that she is, she kept on plugging away!  The wind wasn't much of a factor when we were on the single-track in the woods, but the second we popped out onto the bluffs to make our way in to aid station 2/finish line, it made itself known.  Crazy strong wind that felt like it was going to blow you right into the lake.  I had to hold onto my hat to keep it from flying off for about a 1/2 mile.  As windy as it was, it did feel kinda nice since it was much cooler than it was with the humidity that you felt while in the woods.  I took one 12 oz. hand held bottle and didn't need much other than that.  Just some Sports Beans and I ate some potato chips and brownie bites at the aid stations. We finished in 4:51:41 and had a blast! 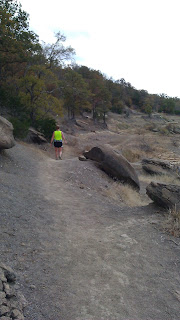 The only thing that marred the day was a situation with mountain bikers on the trail.  A LOT of mountain bikers on the trail...although most of them were very courteous and nice, there were a few that were riding MUCH too fast and yelling at runners.  I was surprised at just how many MTBers there were...it felt like we were jumping off the trail constantly to let them go by.  And later in the race there were so many that I was running paranoid because they'd fly up behind me so fast that every little noise had me looking behind me expecting to see another one.  I'm sure it was no fun for them either, but not a good situation to have so many bikers on the trail with hundreds of trail runners on the same day and I'm glad no one was hurt.  The aid station workers were pleading with them to slow down and the runners were too.  As far as I know, there is only this one trail race at the Northshore trail per year..it would be nice for the MTBers to give us this one day to enjoy.  I know when I show up to my local trails and see there is a MTB event going on I leave and go somewhere else so that I am not in anyone's way.  C'mon bikers.. it's ONE DAY out of the year!
Rant over.  :-P


The volunteers were fantastic as always and it was a fun day..I'm sure I'll be back next year.  The only thing about this race that might keep me from returning would be the MTBer situation..but the lure of those beautiful trails, spending the day running with my Texas friends and the post-race beer and food will win out I'm pretty sure..  :) 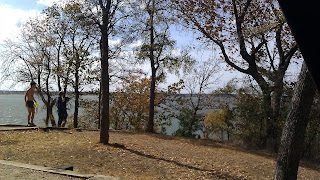 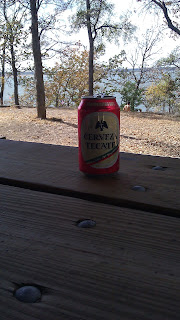