The weekend started out with big gusty bang.  Friday afternoon was a balmy 105 degrees until right before I left for the 3 hour drive to Erick, OK for the 3rd annual Do-Wacka-Do Trail Run.  A cool front came through (thank God!) and along with it came 55 mph wind gusts, dust storms and some rain.  Even though fighting the wind along I-40 westbound was not fun, it was still such a blessing since the cool front would make for a great race for 111 happy runners.


The plan was to camp at the race start in a tent, but when I heard about the wind advisory and rough weather moving in I decided to book a room in Erick.  I got to the Roger Miller museum about 6:30 pm and picked up my packet.  It was filled with fun little things!  I was checked in to my hotel with feet up watching TV by 7:00 pm and spent a relaxing evening watching TV and playing on my Kindle.

I was up early and fixed my favorite pre-run breakfast: sprouted grain tortilla smeared with peanut butter with roasted & salted sunflower seeds sprinkled on and half a banana in the middle.  Rolled it up and put it in a ziploc to eat on the way to the race which was about 10 miles south of town.  Stopped at the Love's across the street from the hotel for a huge cup of coffee and was on the road.  The temps were lovely!! 58 degrees which was amazing considering it's hardly dropped lower than 80 (even overnight) all summer long. 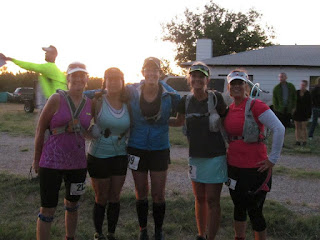 The race start was buzzing with activity.  I found Joel, the awesome and fearless RD, and got to chat with him for a bit before he had to go do his directing duties.  My friends that drove up from OKC that morning arrived and we all got ready to run.  Weeeeeeeeeee!  I love this race.  :) 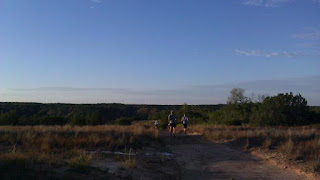 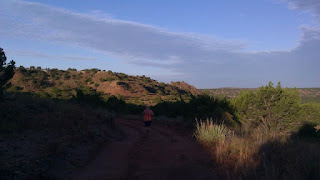 With a big shotgun blast we were off.  The sky was gorgeous and the air was cool..I could tell it was going to be a great run.  I started off running with Jade and after she sped up I ran for a bit with Melissa and Beth. Most of the time I ran alone and listened to good music and looked around as much as possible at the rugged but beautiful canyons.  This race has some VERY steep climbs and steep descents.  It's also very exposed, no tree cover at all so in the cool temps it was fun and beautiful but if the cool front had waited another day to arrive it would of felt brutal.

I had everything I needed on me (Sports Beans, GU, water) and didn't stop at any aid stations until the last one where I grabbed half an orange and cup of Gatorade.  They were delicious and I was so glad I stopped.  The aid stations had great selections of food and even bean burritos that I hear were wonderful! 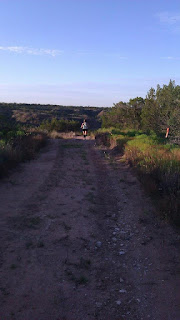 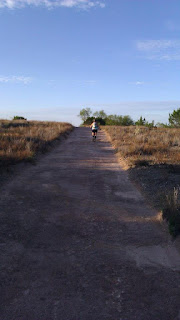 I ended up finishing in 3:21:23 which almost tied my 25K PR, but actually I guess I bested my PR because Do-Wacka-Do is a 16 mile 25K instead of 15.5 miles.  The finisher awards were arm coolers with the Do-Wacka-Do logo on them.  COOL!!!  I had a GREAT time as usual and after the race we set up chairs near the finish line, ate BBQ sandwiches, potato salad, coleslaw and cake while cheering on the 50K and 50 milers that were coming in.  There was some really fast guys out there this year and it was fun to watch them finishing.


This race is an every year event for me--Joel has created a family type atmosphere and although it grows every year it still has that "family reunion" type of feeling.  Many thanks to him and Retta and all of the wonderful volunteers!

Results can be found HERE.

Next up- Rough Creek trail marathon September 15th!
Posted by Julie at 9:56 AM