I made the 4.5 hour drive from Norman, OK to Springfield, Missouri after I got off work at 5:00 on Friday to run the Frisco Railroad Run marathon.  My hotel was easy to find and after a quick check-in, I laid out my running clothes and my race gear.  Since there was going to be aid stations approximately every 2.5 miles along the course I decided to go with one handheld water bottle with a few GU’s in the pocket and some S! caps.  It was already heading towards midnight so I tried to wind down and get to bed so I'd be fresh for the race but sleep eluded me because I was so excited to run the next day.  :)

I woke up before the 5:30 alarm and popped outta bed.  After quickly getting ready and making some oatmeal and coffee, I made the 10 minute drive over to Willard, MO to find the middle school where the race would start. Packet pickup went smoothly and I got my number and chip on.  I love race shirts, especially if they are tech shirts and the Frisco Railroad Run shirt did not disappoint.  Cool shirt!

I didn’t see any porta-potties in the parking lot and was told the only bathrooms there at the start were inside the school by the gym.  I got in line thinking that I had plenty of time since the race didn’t start for 25 more minutes.  WRONG! After standing in line for 15 minutes and barely moving I got out of the line and went outside to wait for the race start.  I really needed to pee, but the website had said there would be a porta-potty 5 miles into the race so the plan was to run and try not to think about my over hydrated bladder until I got to the 5 mile mark.

I saw Ken Childress at the start line and got to chat with him for a few minutes.  He was running the 50 mile race and ended up with a great PR.  Congrats, Ken! The race started right on time and the fun began.  J  The first 2.5 miles were on a paved trail, then we were on the crushed limestone trail and it was beautiful.  Trees on either side of the nice wide trail and the scent of honeysuckle permeating the air.  Lovely!  Running felt smooth and I had some good tunes going.  I remember thinking at one point that it just doesn’t get any better than to get to spend the weekend doing exactly what I was doing.  Missouri is beautiful!  The temperature was about 63 degrees but the humidity was high so I decided to take an S! cap and gel every hour and drink my 12 ounces of water between aid stations.  This worked out well and I never felt bad or like my hydration or nutrition was lacking, which is rare for me.  I got it right during a race for once! 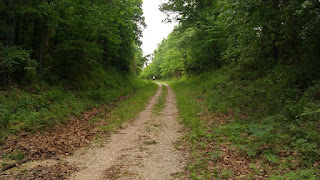 Soon enough I was at the 5 mile aid station and the first thing I was looking around for was the porta-potty and got a sinking feeling when there was none to be found.  I heard people around me asking the aid station volunteers for the porta-potty and they seemed to be in as bad of shape as me.  I decided to run to the next aid station and if there still wasn’t one to be found, I’d find a tree and just hope that I didn’t flash any unsuspecting runners!  There was a lot of poison ivy in the wooded areas on either side of the trail so I wasn’t looking very forward to ducking into the woods OR squatting down amongst the leaves of three.  The next aid station came and went with no bathrooms to be found so I started the hunt for a suitable (and preferable hidden) location.  It hurt to run my bladder was so full!  Luckily for me at about 8 miles in I saw a little grove of trees with a house tucked way back on the other side.  The homeowners had mowed all around the trees up to the trail so I could easily run off the trail through the mowed grass, duck behind the trees and take care of business.  I felt a million billion times better and hit the trail again with a renewed vigor.  SWEET RELIEF!! 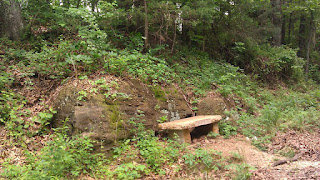 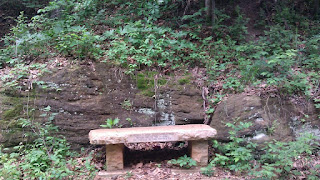 I caught up to two guys that I’d been leap frogging with since the start of the race and we all started talking.  I wish I could remember their names, but when I run long races I get a little brain dead and end up forgetting a lot.  One was from Hot Springs and we talked races and compared stories.  The time passed so quickly having other runners to chat with and before I knew it we were at the 13.1 turnaround and heading back.  One of them was telling me about their friend Leah Thorvilson and that she had just won Hogeye Marathon and Carmel Marathon.  She was at Frisco running her first 50 miler.  Apparently the 50 mile distance agrees with her as much as marathons do because I read this article about her today on www.ultrarunning.com.  Way to go, Leah! Smokin' fast lady!! The two guys and I stuck together until about 14-15 miles and then we all drifted into our own paces and race.  My headphones went back on and I was enjoying every second.  There was a little bit more of a breeze on the second half which felt wonderful and made the humidity not seem so bad.  I kept hearing sirens and saw an ambulance and some fire trucks and rescue units.  Someone said that some racers ran into heat/hydration issues and I said a quiet prayer for them and hoped everyone was okay.

At about 16 miles in I realized that I was slowing and would probably not make it in under 5 hours which was just a loose goal for this race.  A guy jogged up beside me and asked if I was trying for a sub 5 hour marathon and I told him yeah, but didn't think it was going to happen.  He told me that we were only 200 yards behind pace for finishing under 5 and if we got to running then we had a shot.  So we got to running and made up a little time but after a mile or so I told him I had to ease back and he should go on ahead.  He declined and said it was more fun for him to run with someone and to get to know other runners so we settled into a slower pace and chatted.  This is one of the things I love about trail races is I usually end up meeting the nicest, most interesting people!  He told me his name was Chad Spilman and he was from Texas.  Chad and his friends had driven up to Missouri to run Frisco Railroad Run marathon and then were leaving right after the race to drive to OKC where Chad was going to be a 4:10 pacer for the OKC Memorial Marathon the next day.  AMAZING!  So we had a lot to talk about.  I was fascinated that he could run double marathons in a weekend and he told me some of the things that keep him healthy enough to run so much mileage.  We talked ITB syndrome, stretching, running, trail running and ultras and the last 10 miles of the race flew by.  Okay, not flew by...but went a LOT faster than if I'd been struggling them out by myself.  Chad could of ran the rest of that marathon so much faster but he paced me in and I know I finished faster than I would have had I been on my own.  Thank you, Chad!  Hope to see you at future races and that your pacing duties at OKC Memorial Marathon went well! 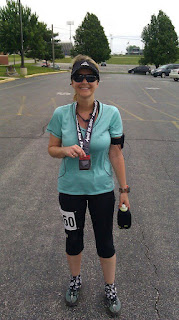 After the race I headed back to the hotel and put on compression socks and propped my legs straight up against the wall which I think really helped with post marathon leg soreness.  I also used the foam roller and rolled out my calves with The Stick.  I stayed one more night and got lots of sleep before heading back to Oklahoma the next day.

I never had any real low points in the race.  Never felt horrible and no injuries other than the always predictable ITB and hip discomfort that I consistently have in long or flat races.  This course was both flat and long and I'm no worse for wear which is encouraging!  I felt great the next day, very little soreness. Now two days out my legs feel fresh and ready to run.

This race was a lot of fun...great course and volunteers.  The aid stations were pretty light on food selection  but did have the basics and I usually carry everything on me that I might need such as gels, water and salt caps.  Porta potties would be nice too.  But I really did love the race and would run it again.  I heard that the race was a lot bigger this year than last year so the few glitches might just be growing pains and all in all I think it was a great event.  Thank you so much for all the wonderful volunteers and to the race director for putting it on. I can't wait to go back to Missouri for more running!